And while there may be more happenings this month that celebrate darkness, Christians need not fear it.

For though the devil may scheme, roar or show his horns, he remains a defeated foe.

The Bible assures that Jesus’ sacrifice on the cross “disarmed the spiritual rulers and authorities.” It calls the cross a moment of victory over the enemy (see Colossians 2:15).

With this in mind, I wanted to share with you three of my top spiritual warfare secrets.

Secret #1: Stand on Your Identity in Christ

Since he’s stripped of any real power, the devil can only deceive a Christian. That’s what his accusations and slander are meant to do.

Though his threats may be felt, they are meritless! For God assures that you are made new and made right in Christ (see 2 Corinthians 5:17-21). When the enemy attacks, simply remind yourself and him of that.

Sadly, today, meditation is often thought of as a new age practice of mind emptying. But meditation began as God’s idea. It’s time for Christians to reclaim it!

In God’s design, meditation isn’t about mind emptying, it’s about mind filling. And it’s done by thinking and speaking God’s Word. When you meditate on truth, the enemy’s lies can’t take root.

Secret #3: Declare the Name of Jesus

The Bible boasts that Jesus is the Name above all names (see Philippians 2:9). Nothing can stand against it.

When you sense a moment of spiritual warfare, don’t get dragged into a fight with a devil who is defeated, but rather, begin to exalt the victorious name of Jesus. This causes the enemy to flee as quickly as he came in. 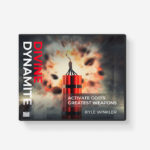